The Government of Malta has issued a call for tenders for the upgrade of the Marsa Junction.  This call covers Phase 3 of a complex infrastructure project which proposes the construction of a multi-level interchange on the junction as approved by the Planning Authority.  Works for the entire project will be carried out over three phases and will cover an area of approximately 25,000 square metres.

The main objective of the proposed infrastructural project is to improve the traffic flow at this strategic location which represents one of the major traffic hubs in Malta.  Works will include the construction of a three-grade separated junction, the demolition of factories overlooking Triq il-Labour, the shifting of existing carriageways and the upgrading of existing road infrastructure together with the provision of a Park and Ride facility, street furniture and landscaping.  The proposal also includes the implementation of a system of bridges that link Marsa, Paola, Tarxien and Luqa which are served by arterial roads.

Phase 3 of this broad project is considered to be the most substantial part.   The tender has been published on the 20th October 2017 and the deadline for submission is currently due for the 30th January 2018.   Link to the tender documentation as published by the Government of Malta. 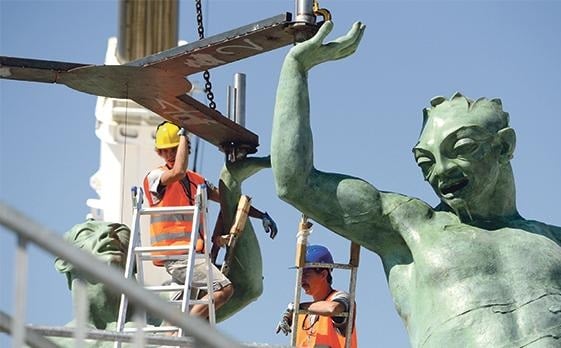 After an intensive restoration in Florence, the impressive Triton Fountain designed by Vincent Apap has been brought back to its former glory, flaunting its original azurite blue colour.  QP is engaged as Project Managers to the Italian Consortium of Restoration Contractors commissioned to undertake this extensive task of rehabilitation.   The ability to fully appreciate this revived work of art is highly anticipated with its completion expected at the end of this month.